Visiting Baroque Palace Molsdorf in Erfurt & How to Get There

Erfurt City has so much to offer but if you’re into Baroque castles, there’s hardly one more glorious than Palace Molsdorf. Despite its size it’s stunning through its intricate decorative items, the symmetry, gorgeous parks and lapidarium and unique library. Here are some practical tips for Molsdorf visit.

Well, technically it’s a palace. You see, in Germany we have different words to specific what type of grand building we’re talking about, which also reflects what time it was built in.

A Burg denotes a fortification for the main purpose of defense but often including private residential rooms as well. Those are mainly from the Middle Ages.

The succeeding era of the Renaissance saw castles turn more into grander versions, palaces, with the Baroque times culminating in lavish and pompous palaces (Schloss). In the truest sense.

Even smaller mansions in Germany are regarded more as palaces than mansions and therefore often carry the label Schloss, such as is the case with Schloss Molsdorf.

For the sake of simplicity, we’ll use the label interchangeably in this article.

Where is Palace Molsdorf in Erfurt?

Molsdorf is still part of the capital of Thuringia, which is the centralmost German state. Erfurt itself has many wonderful sights to offer, one of them being Molsdorf Palace at its outskirts.

More travel tips: Where to go in Thuringia in winter

How to Get to Molsdorf?

There is no train station or big intercity bus station in Molsdorf. So you would have to get to Erfurt first, which is easy. There are many trains and buses headed here on the daily.

If you’re driving a car, you can get to Molsdorf from Jena within 45 minutes via the autobahn A4. From Weimar, it’s the A4 also but only takes half an hour. Of course, the shortest route would be Erfurt with less than half an hour by car via the A4, too.

Coming from the A4, exit at Neudietendorf in the direction of Molsdorf. Near the castle, you can find a car park.

By taxi, this would cost about 40 EUR one way if you’re coming from the main train station of Erfurt. So it’s not cheap.

However, there is public transport and Erfurt has a good bus network you can fall back on. A one way ticket costs 2.10 EUR and takes about 26 minutes from the train station. Look at the timetable for bus 51 with your stop being “Schloss Molsdorf”, which is the final stop. Here’s the live bus schedule.

How do I pronounce Molsdorf?

The first syllable is pronounced like “mole” and the second like “door” but with an added F at the end.

There are many stunning castles in Thuringia you can visit. But Molsdorf is one of the prettiest I’ve seen so far in my explorations around Germany.

It might seem small at first but sits on a stately eight hectare large estate framed by a fortified North façade. There, you can find watch towers and a stone bridge. After entering through those, the contrast with the 16th century baroque castle seems rather stark. And is such a pleasant surprise!

Erfurt’s baroque castle was built in the 16th century, actually making it a late baroque building.

Originally, the place where the palace now stands hosted a water castle, which you can still see by the moat and towers. It was owned by Molsdorf family but changed owners throughout the centuries.

In 1616, the castle was restyled to suit the Renaissance tastes and yet again in the 18th century to look more Baroque. Only very esteemed masters were commissioned to fulfill this duty of redecorating both the house and gardens.

That was mostly due to the Imperial Count Gustav Adolf von Gotter (1692 – 1762), who was also a Prussian diplomat and shook hands with the German Emperor, the Prussian King, the Russian Tsar and many princes­.

When he was at the height of his career and well into money, her discovered and purchased the Erfurt palace, which quickly became his favorite place to be. Look closer at the Northern gate and you can read it yourself in Latin: “Hicce terrarum praeter omnes angelus ridet”.

Sadly, he spent way too much and couldn’t keep up his lifestyle without giving up his palace, which he sold in 1748. In 1826, the gardens and grounds were updated into a country park.

Over the years, the palace fell into disrepair, was repurposed but luckily saved from falling to pieces and turned into a museum. Both gardens and interior have been painstakingly restored and can now be visited.

Look out for these special features

No wonder, everything in Molsdorf is made to excite and delight, from its symmetry, choice of colors to intricate décor. After all, it’s not a mere palace, but a Lustschloss, a palace for hedonists, a place to spend a good time, or “vive la joie” as is even ingrained in the banquet’s paneling.

Of course a visit to Molsdorf Palace isn’t complete without visiting both Molsdorf Palace and Park. The entire design is intertwined in such a way that the south wing has a perfect view over the park. And in that park, you can take a quiet amble along the old trees, around the moats and many a statue in the lapidarium.

Back then, romantic walks were en vogue and you might as well recreate this sentiment as the park really begs for slowing down.

When you visit the castle museum inside, you get to see the beautifully renovated rooms with Baroque and Art Nouveau  interior features.

Furthermore, the Castle Library of Molsdorf hosts a special erotica cabinet with books ranging from medicinal or scientific to belletristic. This includes a collection of graphics comprised of 1672 volumes with 42 of them being from the 18th and 19th century. You can look at the books but not borrow one.

If you time your Molsdorf visit right, you can attend a chamber concert in the festive hall, which is possible from March to December.

How much is the entrance fee?

The palace grounds are free to visit. Access to the Molsdorf castle museum is 6 EUR per person. 4 EUR for concession prices. Should you have the Erfurt Card, entry is included.

When should you visit?

As is typical for museums in Germany, the castle is closed on Mondays. You can only enter Molsdorf Palace from Tuesday to Sunday from 10Am to 6PM. Guided tours leave hourly.

In my opinion, the best time to visit is from spring to early autumn, when the grounds are vivid with either flowers or colorful foliage.

In winter, the palace makes for great photos mostly when it’s sugarcoated in snow, which happens rarely. I was blown away when I got the chance to see it in the snow and quickly made my way here. So keep checking the weather report.

Top 20 Most Beautiful Cities in Germany – Bring Your Camera!

The Top 20 Most Romantic & Best Christmas Markets in Germany 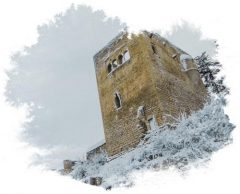 How to Visit Medieval Castle Lobdeburg in Jena, Germany

Don’t travel at the moment. To stay up to date on the current virus situation, refer to official channels, like WHO or CDC.